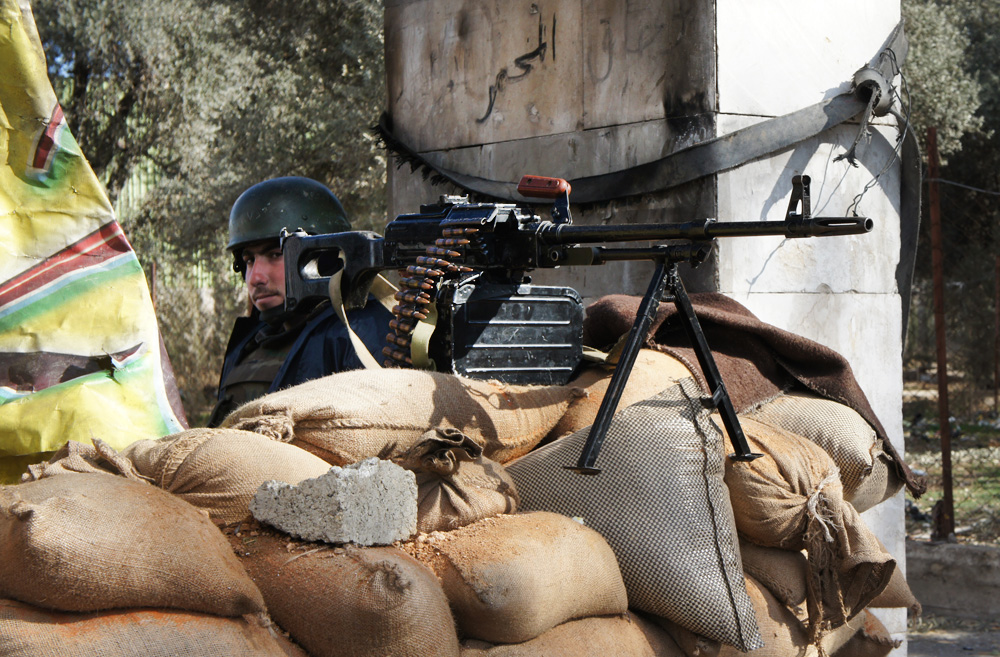 A delicate balance of power in Syria’s last opposition stronghold

The delicate balance of power in Syria’s northwestern province of Idlib appears unsustainable and, to say the least, it is difficult to predict how events will unfold. The Russian-backed Syrian regime offensive to take over the country’s last remaining “de-escalation zone” seems to have lost some steam.

Notwithstanding the Syrian Arab Army’s (SAA) capture of Kafr Nabudah and Qalaat al-Mudiq, President Bashar al-Assad’s forces haven’t been able to retake more than a small percentage of Idlib. Within this context, the governments in Damascus and Moscow have embraced collective punishment to achieve their goals in what remains the last bastion of the Sunni-dominated anti-regime rebellion.

The politics of Idlib are extremely complicated, particularly with respect to outside powers that have vested interests in the outcome of the fight for the province. Although Turkish-Russian ties are complicated, and the war in Syria is only one factor in this bilateral relationship, Ankara and Moscow’s disagreements over Idlib have fueled a notable degree of tension between the two capitals.

This is notwithstanding the overall improvements between them since the failed coup plot against Turkish President Recep Tayyip Erdoğan on July 15, 2016, and pending Ankara’s acquisition of the Russian S-400 missile system.

As is so often the case in the Middle East, this question of which groups are in fact terrorist organizations is a sensitive one, and at the heart of major disagreements between various governments regionally and internationally. Currently, Turkey and Russia are not on the same page when it comes to definitions of terrorism in Syria.

Formerly known as the Jabhat al-Nusra Front, Hayat Tahrir al-Sham (HTS) is a relatively local jihadist insurgent group, which is often compared to the Islamic State. HTS operates in northern Syria, predominantly in Idlib province. Since its split from al-Qaeda in 2016, it has effectively become one of the most powerful militant factions in Syria and a major source of contention in Ankara-Moscow relations.

To understand HTS’s struggle to survive in Syria’s last rebel-held province, three key questions require examination. First, how has its 2016 split from al-Qaeda affected the group’s modus operandi and power consolidation goals? Second, exactly what is its place in the Syrian “insurgency?” Third, and most important, how will its complex relationship with Turkey play a role in the country’s overall peacemaking efforts?

In the interest of the Jihad

In 2012, Jabhat al-Nusra (al-Qaeda’s Syrian branch) was formed in Syria as part of the opposition against Bashar al-Assad’s government. Specifically, it was created out of the central command from both al-Qaeda elements and Abu Bakr al-Baghdadi, the leader of the Islamic State of Iraq. Jabhat al-Nusra’s leader, Abu Muhamad al-Jolani, effectively established the extremist group through donors in several Gulf states, revenue collected from taxation and asset seizures in areas under its control, adeptly conducted insurgent attacks and the influx of foreign fighters from countries around the world.

A year later, upon the split between al-Qaeda and the Islamic State, Jabhat al-Nusra pledged its loyalty to al-Qaeda. At this point, Jabhat al-Nusra’s primary strategy was immersing itself within the Syrian opposition for the sake of survival. However, it gradually “crowded out more moderate groups and came to dominate it.”

Despite the pledge of loyalty, however, cracks were beginning to surface as the group sought to rebrand itself as Jabhat Fatah al-Sham in mid-2016. Eventually, in 2017, Jabhat al-Nusra rebranded itself with various anti-government Sunni coalitions and formed what is now known as Hayat Tahrir al-Sham. Al-Qaeda, headed by Ayman al-Zawahiri, saw the breakaway as an act of betrayal and described it as a “violation of the covenant.”

There are speculations surrounding the group’s 2017 breakaway from al-Qaeda. One of the theories include HTS’s long-standing notion and prioritization of “unity” across the insurgency groups. According to HTS officials, the breakaway from al-Qaeda for the sake of unity was “in the interests of the jihad” and thus came before any sorts of organizational ties and fealties.

This unity comes not from a perspective of grouping all factions across the insurgency, but rather one group consolidating power via a single military and governing body, which in this case became the HTS-formed National Salvation Government (NSG).

That said, this split from al-Qaeda has resulted in a shift in HTS’s strategies toward regional expansion over time. Unlike al-Qaeda, which has long preached the broader and long-term goal of creating a global caliphate and countering Israel and the West, HTS’s rhetoric has largely rested on a more immediate and regionalized expansion. According to HTS leaders, the group’s primary goals include overthrowing the Assad regime and ejecting Iranian influence from Syria, thereby effectively establishing Islamic rule in the country.

Hayat Tahrir al-Sham’s power consolidation efforts have largely been successful, as seen through its capture of major portions in Idlib after battling other insurgency groups. Despite handing over various liberated areas in the Idlib and Aleppo provinces to the NSG’s administrative rule, many critics argue that NSG is just a front for HTS to continue monopolizing authority in the region.

Another point of contention between al-Qaeda and HTS has been the latter’s complex relationship with Turkey, which has not only strained efforts between the two groups but has also complicated the region’s peacemaking efforts. Despite Washington designating HTS as a terrorist organization, the group has still sought to position itself on the international playing field, essentially to create “balanced relations” with other actors. This is the inflection point where definitions of terrorism come into play between Russia and Turkey.

This activity comes at an especially crucial time as other major actors, including Russia and Turkey, seek de-escalation and demilitarization efforts in the region, which may effectively mean the dismantling of all armed groups, including HTS. Looking ahead, as some experts have opined, HTS would suffer immensely as a result of a major falling out with the local civilian population writ large.

Yet by the same token, HTS wants to avoid appearing weak or vulnerable to either its armed enemies or unarmed civilians. Therefore, the jihadist force will be forced to balance its interests in potential serving in a governing role in Idlib. This requires obtaining legitimacy through appearing to be a defender of local Syrians while also maintaining its ability to fight off enemies and, according to the group’s thinking, beyond Syria’s borders while asserting its power in the northwest of the country.

Hayat Tahrir al-Sham’s efforts at leveling the playing field and legitimizing itself have been most exemplified through its accommodation toward Ankara’s strategies and Turkish military operations across Syria. For instance, in attempts to curb the flow of incoming refugees to Turkey, Ankara has set up various military posts across Idlib to prevent any Syrian government offensives from taking place.

According to Qatar’s Al Jazeera news network, Turkey has done so through cooperation with HTS in which the group has also agreed to accompany Turkish military patrols. In turn, this deal, struck in September 2018, allows for HTS to continue launching various offensives without Turkey’s intervention.

The complexity of the situation comes not from the fact that al-Qaeda views Hayat Tahrir al-Sham’s seemingly amicable relationship with Turkey as a betrayal of jihadist principles, but rather from Turkey’s designation of HTS as a terrorist organization. Despite such a designation, Turkey’s military operations on the ground have indicated otherwise. As Ankara launches full-scale offensives against the Kurdistan Workers’ Party (PKK) and, at times, the Islamic State, HTS has essentially remained unscathed.

Ultimately, there appears to be a symbiotic relationship in play. HTS is attempting to maintain its northern strongholds and a somewhat cooperative relationship with Turkey to keep itself alive, especially with its international designation as a terrorist organization. At the same time, knowing that HTS is by far the most powerful rebel group in northern Syria, for Ankara to launch a full-scale offensive against the group would undermine Turkey’s national interests for several reasons.

First, Turkey’s buffer zone (set up with HTS’s assistance) against the Syrian government in Idlib province may become jeopardized. Second, to launch a full-scale military confrontation against the most powerful rebel group in northern Syria would result in a significant depletion of Turkey’s own resources and efforts. Third, Ankara’s perceived ability to influence HTS provides Turkey with greater leverage in the Astana negotiation process.

So what will the future look like for Hayat Tahrir al-Sham as the war in Syrian winds down? At this point, given its complex relationship with Turkey and its deterrence strategy of maintaining authority, this remains unclear. Russia will likely help determine the outcome. Moscow is very likely to clash with Ankara more publicly over Turkey’s support for the group. This “outing” may lead Moscow toward other tactics to influence Turkish actions in Syria. (It is noteworthy that Putin has previously labeled Erdoǧan and his family Islamic State enablers.)

However, what is clear is that HTS has no intention of letting go, especially as it seeks to establish its own Islamic statelet in Idlib province. If that comes to be, the security situation will continue to be a challenge for all parties seeking to bring the Syrian Civil War to an end.

Dr. Theodore Karasik and Maya Yang
Dr. Theodore Karasik is a senior advisor to Gulf State Analytics and examines religious-political issues across the Middle East, North Africa and Eurasia. Maya Yang is a freelance journalist currently based in New York. She graduated from the University of California, Los Angeles (UCLA).