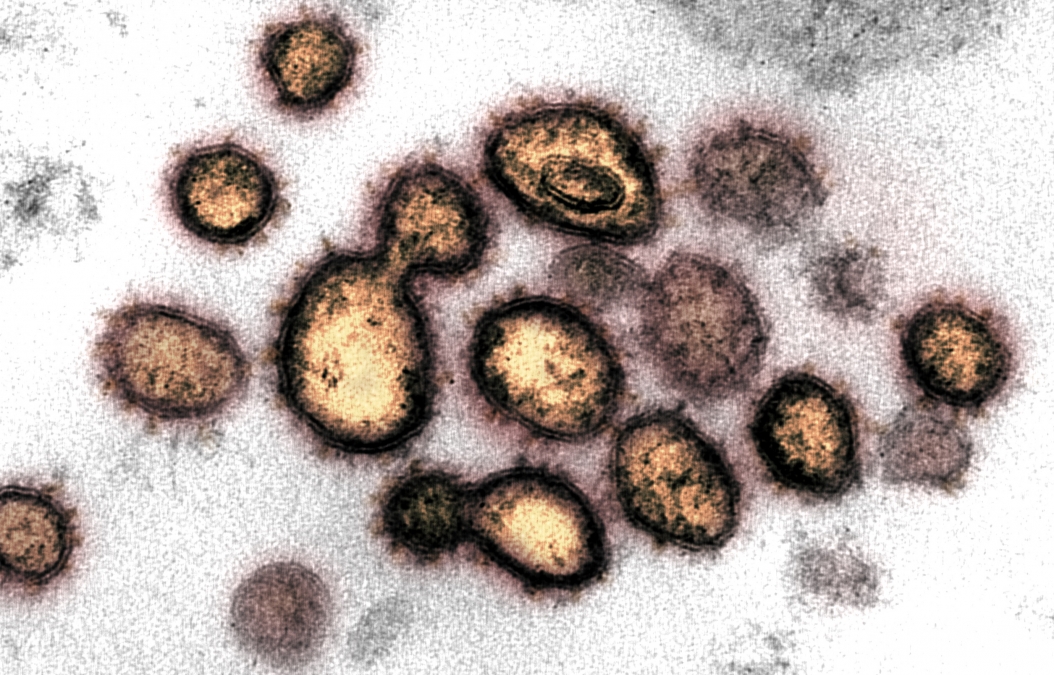 By Rauf Mammadov and Ozal Mammadli

Azerbaijan found itself sitting on a COVID-19 (a.k.a. coronavirus) powder keg when the news surfaced in mid-February 2020 that neighboring Iran had experienced one of the first cases outside China. Iran, with a population of 83 million, quickly became one of the world’s worst-hit places, along with China and Italy. As of March 25, Iran’s COVID-19 death toll has reached 2,077 and there are over 27,000 confirmed cases in the Islamic Republic. Like every country responding to the threat, Azerbaijan has made wise decisions as well as mistakes. As of March 23, the country’s COVID-19 count is 87 cases and one death.

The run-up to the outbreak

Azerbaijanis’ attention focused on internal politics when the country learned on February 15 that Iran’s first coronavirus case had occurred in Qom, a holy city not far from Azerbaijan and Iran’s border. Only six days earlier, Azerbaijan had held a snap election for parliament that led to President Ilham Aliyev maintaining control of the country. His New Azerbaijan Party won 72 of the 125 seats in the single-chamber legislative body, and pro-Aliyev opposition parties won most of the remaining seats. Consequently, with government officials in Baku so focused on Azerbaijan’s internal political situation they did not act on the warning until end of the month.

Making immediate plans to combat the virus should have been a priority. Azerbaijan and Iran’s border is 750 kilometers long. More than 20 million ethnic Azeris live in Iran, and the countries share deep cultural, political, and historic ties, meaning there is constant interaction between their populations.

In addition to being distracted by Azerbaijan’s domestic politics, the government in Baku was trying to avoid being caught in a geopolitical row between Washington and Tehran following the assassination of Iran’s Major General Qassem Soleimani at the start of 2020. Although both Azerbaijan and Iran are Shi’a-majority, Azerbaijan is an American ally and has good relations with the Islamic Republic’s archenemy, Israel.

Azerbaijan responded to the news about the COVID-19 outbreak in Qom by dispatching the head of the State Border Service to a key border-crossing area. In Astara and Jalilabad, the agency set up mobile clinics which were essentially tents with portable beds. As the number of cases in Iran jumped, Azerbaijani health experts began calling for a closure of the border. Although Baku has established an operational headquarter at the end of January, Azerbaijan’s government did almost nothing for two weeks, saying that the situation was under control.

What finally triggered action was Azerbaijan’s authorities confirming the country’s first coronavirus case on February 28. A day later, Azerbaijan confirmed two more cases, and the government shut the border with Iran. It also established a coronavirus-fighting headquarters. On March 2, officials closed all of Azerbaijan’s schools and universities. Two days later, Azerbaijan documented its first coronavirus death, which remains the country’s only death so far. On March 10, the government banned all public Novruz celebrations.

On March 13, Baku banned gatherings of more than 10 people, including weddings and funerals. On March 17, the country’s government limited entrance to the capital and Sumgait to residents and essential services providers. Additionally, on March 20, authorities extended the schools’ closure through April 18.

The lack of preparedness on the part of Azerbaijan’s government has taught the country a lesson. Although Baku had a national emergency plan which included a protocol for fighting epidemics, it had never conducted an exercise for countering such a threat. Although oil- and gas-rich Azerbaijan is the most prosperous Caucasus country, the Global Health Index rankings listed it as the region’s least ready to battle an epidemic.

Besides, the government agency responsible for fighting epidemics, the Center for Control Over Especially Dangerous Infections, has never been subject to quality control reviews. Neither has the Central Reference Laboratory, the government’s new epidemics testing operation. 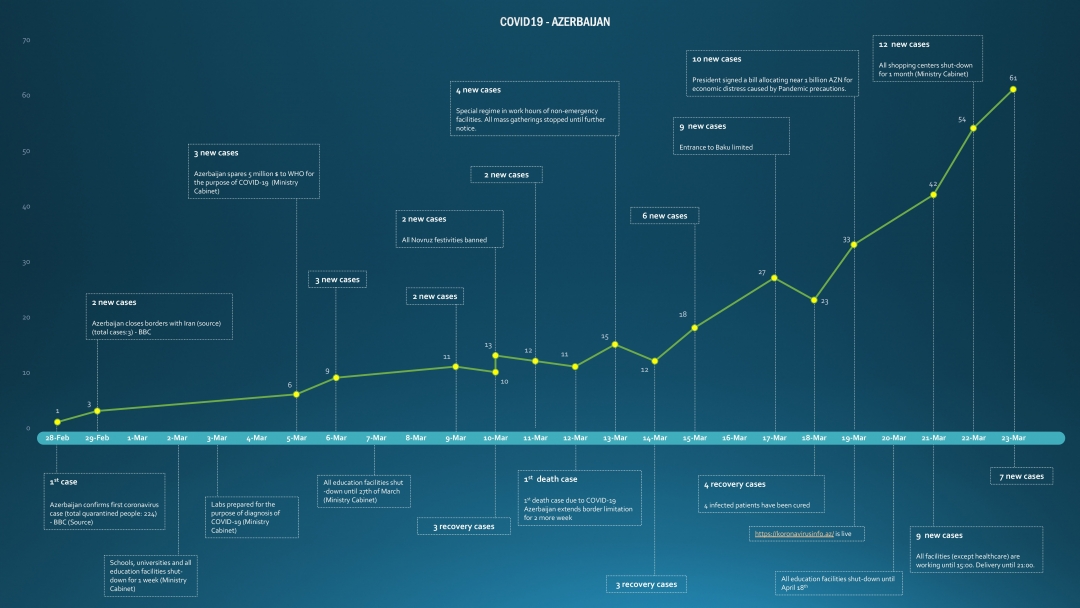 Azerbaijan’s chief epidemiologist initially downplayed the threat. But as the surge in Iranian cases showed that the threat to Azerbaijan was real, the scramble was on. One step was every sizable public agency establishing its virus-fighting operation, emulating the government’s national response center. The government then closed the border and schools and banned gatherings. It also disinfected public places and established quarantine facilities in Astara- near the Iranian border – and in Gobustan, near Baku.

In the beginning, the officials did a poor job of using announcements and the media to let Azerbaijanis know about social distancing and other ways to keep from catching the virus.

They also failed to give Azerbaijanis timely warnings of disruptive actions they were going to take. As an example, a last-minute ban on air travel between Turkey and Azerbaijan left hundreds of Azerbaijanis stranded at Turkish airports.

The government’s messaging has become more coherent since mid-March. On March 19, officials in Baku launched a dedicated website about COVID-19. Other relevant state entities have started both media and social media campaigns to educate people on preventive measures. The leadership also announced the purchase of necessary equipment’s and labs while regularly updating the info on the number of tested people.

The coronavirus has hammered the economies of countries worldwide. Without question, Azerbaijan is no exception. Remittances are down from Azerbaijanis working in Turkey and Russia. They send less money home because many have lost their jobs or returned to Azerbaijan to be with family at a critical time. COVID-19 has also crushed Azerbaijan’s tourism industry while also decimating the incomes of Azerbaijanis who made their living through cross-border trade with Iran. These disruptions have come against a plunge in the price of oil, which along with gas is Azerbaijan’s major source of income.

A price war between Russia and Saudi Arabia that started in March is affecting every oil producer’s revenue. Although Azerbaijan has a larger sovereign wealth fund and more central bank reserves than it did amid previous oil crises, the country’s banking system has come under strong pressure due to a drop in the value of the country’s currency, the Manat.

Action from the top

As Azerbaijanis’ concern mounted, Aliyev and his vice presidents stepped in to ask for citizens’ calm and cooperation. The president also announced the allocation of $580 million in funds to fight COVID-19 and an increase in the salaries of the medical workers.

The messages from the top took a political turn when top officials accused the opposition of trying to use the turmoil to bolster their cause. Aliyev hinted about an opposition crackdown while indicating he would not exclude the possibility of declaring the situation a national emergency.

Despite mistakes made when responding earlier on to the coronavirus, the good news is that Azerbaijan, as the Caucasus’s most populous country, has the fewest confirmed cases per capita in the region. It is the only Caucasus country with a confirmed death, however.

Notwithstanding the initial hiccups and coordination problems, it is to the credit of the government in Baku that Azerbaijan has significantly improved its COVID-19 policies and actions taken in order to combat the disease. The country’s leadership has certainly become more accountable and coherent in terms of how it deals with this terrifying crisis and its implications.