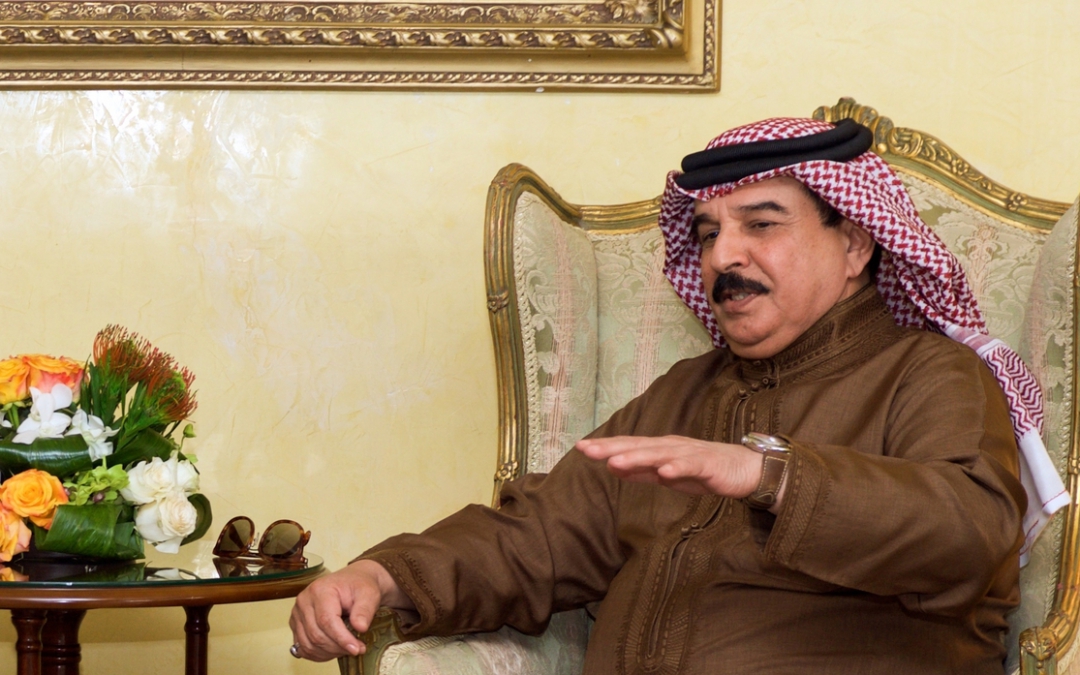 The decision on April 22 by Bahrain’s King Hamad bin Isa Al Khalifa to restore the citizenship of 551 individuals may be a first step in what remains a long and difficult road toward dialogue and reconciliation in the Gulf island state. Bahrain has been wracked by more than eight years of civil unrest that has severely damaged the kingdom’s economy, seen thousands of protesters jailed, and nearly 1,000 stripped of their citizenship.

The island’s main political opposition societies have been banned and their leaders jailed. In June 2017, Al Wasat, Bahrain’s only independent news site was shuttered, effectively silencing free media. Freedom of expression, too, has been severely curtailed.

The human rights activist Nabeel Rajab is currently serving a five-year sentence for tweets that criticized the war in Yemen and conditions in the country’s main prison, Jau, south of the capital Manama. Another activist, Abdulhadi al-Khawaja, is serving a life sentence and Sheikh Ali Salman, the leader of al-Wefaq, the largest opposition movement, was jailed for 15 years which on appeal was altered to life. Other oppositionists and human rights activists are either in prison in Bahrain or in exile in the West.

The vast majority of those affected by the government’s crackdown on dissent are Shi’a Muslims, the majority indigenous community in a kingdom ruled for more than two centuries by the Sunni Al Khalifa family. Shi’a Bahrainis have long complained of discrimination in job hiring, in housing and in education and other facilities provided by the state.

They point to a gerrymandered political system entrenching the status quo and the failure of the ruling family to deliver on promises made in 2001 for a more equitable power sharing arrangement. When those concerns boil over and lead to unrest, the government responds with harsh measures.

Indeed, the history of Bahrain since it gained independence from Britain in 1971 has been one of persistent cycles of reform and repression, intrinsically linked one to the other based on not only the sectarian divide but also how political space operates in a narrow confine of expression. When reform demands go too far and threaten the position of the ruling family, repression kicks in. That in turn becomes excessive and a process of reform begins anew.

Bahrain elected its first parliament in 1973. But after legislators refused to approve a draconian state security law, parliament was dissolved just two years later. The then and still prime minister, Khalifa bin Salman Al Khalifa, together with his brother Isa, the emir, ruled with a firm hand. They were aided by Ian Henderson, a Scotsman who ran the state security apparatus with such ruthless efficiency, he earned the sobriquet “Butcher of Bahrain” from regime opponents.

A coup attempt in the early 1980s and an uprising in the 1990s calling for democratic reform led to periods of intense repression. However, the repression eased when the emir died in 1999 and his son, Hamad bin Isa Al Khalifa, succeeded him. Hamad introduced a reform programme that saw the state of emergency, in place since 1975, lifted.

The state security law was abolished. Political opponents and human rights activists were released from jail and others allowed and indeed encouraged to return from exile under a general amnesty. Restrictions on the media were loosened.

In February 2001, a referendum was held in which Bahrainis voted overwhelmingly in support of the National Action Charter, a roadmap towards the creation of a constitutional monarchy. In 2002, Bahrain adopted a new constitution along the lines of the charter’s provisions, with Hamad declaring himself king. For the next several years, though many Shia continued to feel marginalised and discriminated against, the reform agenda was the order of the day, a state of affairs that benefitted the country both economically and politically.

The Arab Spring and the events of February and March 2011 saw the cycle of repression return with a vengeance. Peaceful calls for a faster pace of reform gained huge support in the kingdom across sectarian lines. In a country with an indigenous population of less than 700,000, it is estimated more than 100,000 took to the streets of Manama. The ruling family saw the reform demands as a major threat, the most serious it had ever faced.

There was good reason for concern: popular protests had already toppled two Arab strongmen in North Africa.  For its part, Saudi Arabia feared that should the Al Khalifa give ground, that would serve to empower its own Shi’a community, heavily discriminated against and the majority population in the oil rich Eastern Province adjacent to Bahrain.

At the request of King Hamad, the Gulf Cooperation Council Peninsula Shield common defense force intervened. On March 14, 2011, Saudi Arabia joined by the United Arab Emirates (UAE) sent troops down the causeway linking Bahrain to the Saudi mainland. Demonstrations were crushed and protesters routed by Bahraini security and military forces. Dozens were killed, hundreds wounded and thousands arbitrarily jailed. Torture in detention was widespread with at least two detainees being beaten to death.

King Hamad, facing international criticism, commissioned a tribunal of human rights experts chaired by the distinguished law professor Cherif Bassiouni. The Bahrain Independent Commission of Inquiry (BICI) was, and remains, the only independent analysis of its kind dealing with the events of the Arab Spring and it is to the king’s credit that he commissioned it. Bassiouni’s report, released in November 2011, was a damning indictment of how the government had handled what had been a largely peaceful call for democratic reform.

The king accepted the report in full and promised to carry out all its recommendations, many of which relate to the police and security forces. Critics argue that in the years since the report very few of the recommendations have been fully implemented. The government takes the position that most have.

The government has also taken the position that Teheran was behind the unrest of 2011 and continues to foment trouble. It has used that claim to justify the hardline tactics it has taken against the Shia community. While it is true that Iran has a strong  religious influence on Bahrain’s Shia the opposition argues that the authorities have misrepresented and overstated that role.

Among other arguments, they point to a UN sponsored poll conducted in 1970 that showed the overwhelming majority of Bahrainis rejected Iranian sovereignity over them and welcomed the establishment of an independent nation.

What is not in dispute is that the regime, citing security concerns, has continued to bear down hard on any form of dissent. Dialogue and trust between the opposition and the ruling family has completely broken down. However that may be about to change. On April 26, Hasan Shafaei, an official at the Bahrain embassy in London met with me.

He said that King Hamad wants to “encourage opportunities to create a better situation.” Shafaei is a former activist. In 2002 he was a founding member of the Bahrain Centre for Human Rights with Nabeel Rajab and Abdulhadi Alkhawaja. He told me that in his opinion the opposition had “missed opportunities in the past” and urged it to “take advantage of this goodwill from the king.”

The citizenship restoration decree should be seen as King Hamad’s signal that now is the time to move forward to dialogue. Significantly, included in the 551 were 138 names of individuals who had been stripped of their citizenship and sentenced to between 3 years and life in a mass trial just a few days previously, on April 16.

Though the prison sentences stand, King Hamad could not have stated more clearly that citizenship stripping should not be used by the courts as punishment. It is a step that will not have pleased some within the ruling family, but it is as strong an indication as any that the cycle of repression could end, and an agenda of reconciliation begin.

To speed the process of reconciliation along, Shafaei, a human rights advisor to the embassy said that “more good news was coming.” That could include the release of political prisoners, including Nabeel Rajab. He noted several recent meetings between the prime minister and a senior religious leader of the Shia community Sheikh Abdullah al Ghurifi.

Those meetings, I was told, had the full approval of the ailing Ayatollah Isa Qassem, the highest religious authority for Bahraini Shia. (However, Sheikh Qassem was not among those who had his citizenship restored by the king after having it revoked in 2016.)

Shafaei also pointed to a new alternative sentencing law passed last year that includes the imposition of community service sentences, house arrest, electronic tagging and attending training and rehabilitation programmes. Although it was not a point Shafaei made, the new law has the virtue of  helping to deal with serious overcrowding and the consequent poor conditions faced by inmates at Jau Prison.

Ali Alaswad is a senior Al Wefaq politician, now in exile in London. When told of Shafaei’s comments, he played down the significance of both the meetings with the prime minister and the restoration of citizenship. “(King Hamad) wants us to say thank you when their citizenship was taken for no reason.” Alaswad told me there are 4,500 political prisoners in detention, adding “we will not be happy till they are back home.”

At the same time, though, Alaswad signalled there is room for some optimism.  Though Al Wefaq is not willing to enter into a formal dialogue with the government simply on the basis of the king’s citizenship decision, that could change: “Release some political prisoners and we are ready to reconsider. A prisoner release is a good opportunity for dialogue.”

Within that statement lurks the potential to break the long and damaging stalemate that since 2011 has affected every level of Bahraini society. Should the king follow through on what Hasan Shafaei has called “good news” and release some of the prisoners over Ramadan, the arduous task of building trust and finding common ground can begin.

It will be a sign for all Bahrainis they can dare to hope there is an end to an awful period in their history. It would be useful, too, to restore Sheikh Isa Qassem’s nationality. Finally, should the release of prisoners include Nabeel Rajab, an internationally recognized human rights voice, King Hamad will have signalled to the world that he is serious about ending the cycle of repression.