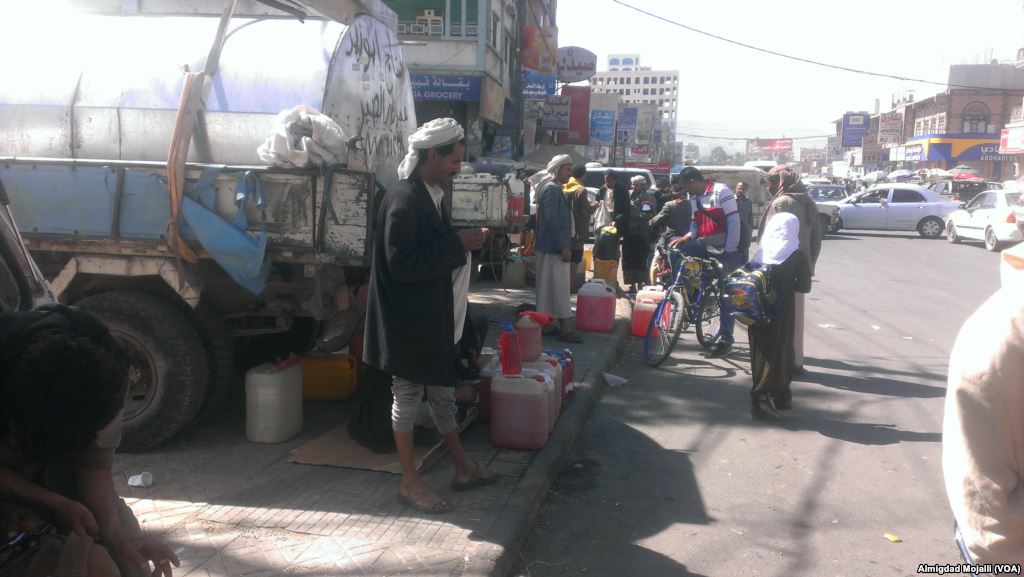 Yemen’s population is enduring extreme living conditions with little chance of a positive change on the horizon. According to the World Bank, output has contracted by 40% since the beginning of the conflict, while 22.2 million people — three-quarters of the population — need humanitarian assistance.

About 18 million people have been left without access to safe water, sanitation and health care, while preventable diseases such as cholera, diphtheria and measles thrive. For the World Food Programme (WFP), Yemen is going through the world’s largest food crisis: The Yemeni riyal has lost more than half of its value in a country almost entirely dependent on imports to meet its food demand. Two million children below the age of five require treatment from acute malnutrition.

In March 2015, six months after the Houthi rebels launched a coup against the internationally recognized government led by President Abdrabbuh Mansour Hadi, a Saudi-led coalition of nine countries intervened to halt the insurgency. The Houthis managed to gain control of the capital Sanaa and the northwestern part of the country, while the Hadi government and its nominal allies formally rule over the rest of Yemen. Nevertheless, since the beginning of the hostilities, public revenue has decreased from 24% of GDP to 8% of a much-reduced GDP, effectively making the Hadi government incapable of providing basic services, even in the territory that it controls.

Hence, the whole country has been split into multiple regions controlled by a myriad of actors with a varying degree of independence. The sheer complexity of the situation on the ground has hindered the provision of humanitarian assistance even by the best-equipped and coordinated organizations.

Within this context, a particularly active aid provider has been the Kingdom of Saudi Arabia, which claims to have been giving, together with its coalition partners, over $18 billion to Yemen in different forms of support since 2015. Just last month, the kingdom and the United Arab Emirates pledged $200 million in aid to be used by Yemenis during the holy month of Ramadan. Saudi Arabia’s financial assets, its diplomatic clout, as well as its role as a warring party in Yemen, make it a prominent, yet controversial, humanitarian actor, which has drawn both domestic and international criticism.

The lack of transparency and formality in Riyadh’s aid policies prevents a comprehensive tracking of the kingdom’s interventions as well as of its underlying conceptions and motivations. Nevertheless, most observers agree in viewing it as a powerful instrument of soft power to entrench Saudi interest in strategic locations. According to research by Eric Neumayer, a scholar at the London School of Economics (LSE), a country voting in tandem with Saudi Arabia at the UN General Assembly is estimated to receive 68% percent more aid from Riyadh.

Specifically in Yemen, the kingdom has been providing aid for decades, but it has scaled up its efforts as the war dragged on. Many initiatives and organizations were launched, sometimes with overlapping functions and unclear focus. The main Saudi humanitarian agency is the King Salman Humanitarian Aid and Relief Centre, founded by King Salman bin Abdulaziz in 2015.

Since then, it has invested $2 billion in Yemen and, among numerous projects, it has pledged to provide school equipment in 14 Yemeni governorates, to pay teachers’ salaries across Yemen, to dismantle mines planted by Houthis and to distribute food staples and medical equipment, also in cooperation with international agencies such as WFP or UNICEF.

However, some observers have defined these initiatives as a mere PR stunt, as they stand in utter contrast with other policies undertaken by Riyadh in Yemen. The United Nations Office for the Coordination of Humanitarian Affairs has attributed the loss of basic services to the numerous closures of Yemen’s sea, land and airports and the lengthy clearance procedures enforced by the Saudi-led coalition throughout the conflict.

Moreover, a survey by the Yemen Data Project, an independent data collection program, has shown that more than one-third of all the air raids conducted by the coalition were directed at civilian sites such as hospitals, schools, markets, mosques, dams, reservoirs and agricultural fields.

In August 2016, for instance, the coalition destroyed the main bridge to the capital Sanaa. Oxfam, an international NGO, issued a statement highlighting how the bridge served as the main conduit for almost the entire food supply delivered to the capital. These actions were defined as part of a “scorched-earth strategy” by Martha Mundy, a scholar at the LSE, to besiege the enemy’s territories by hampering the movement of goods and services to such areas.

Riyadh’s strategy of breaking down Yemen without allowing it to collapse entirely now provides the kingdom with more opportunities to lead its reconstruction. In this context, the Saudi Development and Reconstruction Program for Yemen (SDRPY) was established in 2018 with the function of “implementing development projects in all areas crucial for all the aspects of daily life.” The initiative has been mainly focused on delivering basic infrastructure in the Yemeni territory under the Saudi-led coalition control: schools, greenhouses, desalination plants, hospitals, power stations and more.

For instance, after the coalition closed down the international airport in Sanaa to commercial flights, the SDRPY launched a project for the construction of an airport in Marib. Despite the town being inhabited by only a few thousand people, the airport is supposed to accommodate 2 million travelers a year in a territory just east of the capital but under coalition control.

Also in al-Mahra, a governorate largely untouched by the hostilities, the kingdom is implementing numerous development projects while introducing a significant military presence and taking control of the governorate’s facilities. A Saudi commander in al-Mahra admitted that the development initiatives are intended to cultivate goodwill. However, hundreds of locals regularly demonstrate against what they identify as a “Saudi invasion.” Mohammed Abdullah Kuddah, the former governor of al-Mahra, was ousted by President Hadi after speaking out against the Saudi presence.

In yet another addition to its humanitarian efforts, Riyadh has launched the Yemen Comprehensive Humanitarian Operations with a wide array of objectives: a $1.5-billion donation to international organizations, a $2-billion transfer to the Yemeni Central Bank and the expansion of commercial and humanitarian infrastructure. Along with such efforts, the kingdom has heavily invested in the promotion of the operation by hiring numerous foreign consultants and public relations firms.

The International Rescue Committee (IRC) has heavily criticized the initiative. The plan, claims the NGO, seeks to divert humanitarian and commercial imports from Yemen’s biggest ports in Hodeidah and Saleef (located in disputed territory) to the southern ports of Aden, Mokha and Mukalla, which are under coalition control.

As a result, YCHO would politicize access to aid by granting the Saudi-let forces control over entry and transit points. A humanitarian agency reported having encountered at least 70 checkpoints on the road that connects Aden to Sanaa.

In August 2018, a leaked document revealed the kingdom’s plan to build an oil pipeline that would connect its wells to the coast of al-Mahra, where a contingent of Saudi armed forces has already been deployed within the SDRPY initiative. Saudi Arabian oil would thus have direct access to the ocean while bypassing the Strait of Hormuz, which is exposed to Iran’s military actions.

As some have stated, it makes sense for Saudi Arabia to finance the humanitarian aid that Yemen desperately needs. Indeed, having already lost more than two decades in terms of development, Yemen would certainly benefit from a more comprehensive and coherent humanitarian support.

*Fair Observer is a media partner of Gulf State Analytics

Dr. Theodore Karasik and Jacopo Spezia Depretto
Dr. Theodore Karasik is a senior advisor to Gulf State Analytics and examines religious-political issues across the Middle East, North Africa and Eurasia. Jacopo Spezia Depretto, an intern with GSA, is a pursuing a MA degree in comparative and Middle East politics and society at the Eberhard Karls University of Tübingen (Germany) and the American University in Cairo (Egypt). His research focuses on economic reform in the Middle East and North Africa, the political economy of Gulf oil exporters and the Israeli-Palestinian conflict.