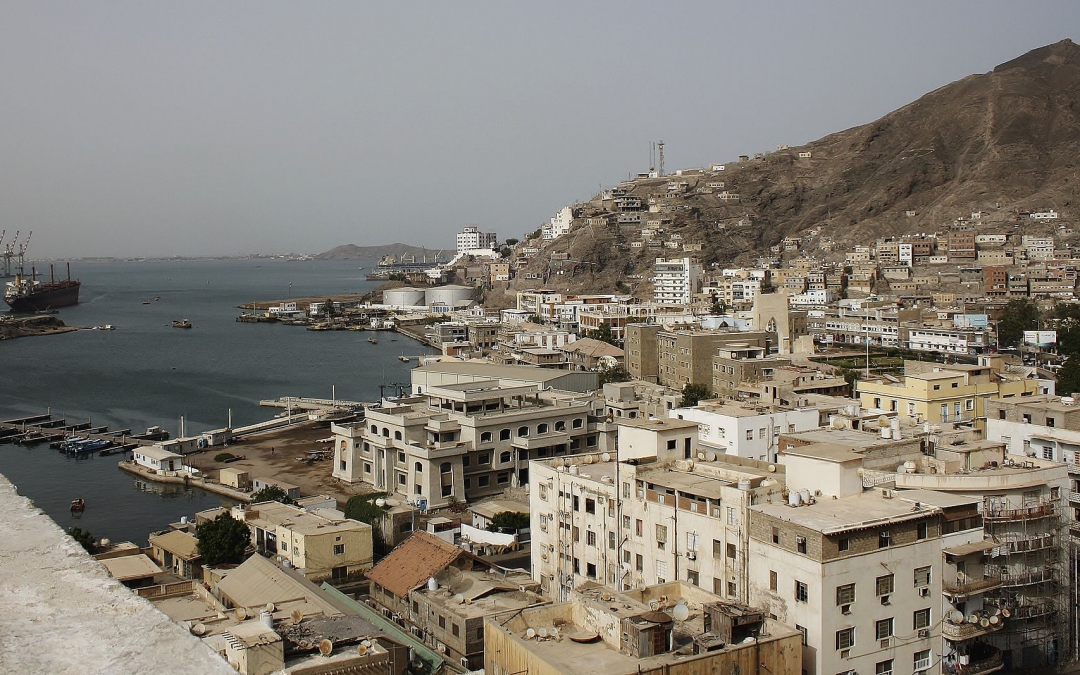 Fighting for legitimacy: The dueling sovereignties in southern Yemen​

By Tyler B. Parker​

The circumstances of recent weeks confirm the need for a frank discussion over the future of southern Yemen.

These actors’ shared mandate to defeat the Iranian-backed Houthi rebels, who have controlled most of northern Yemen since March 2015, has faced challenges for years. Tactical disagreements sparked clashes in January 2018, but strategic divergence now abounds.

The main driver of conflict is the incompatibility of their respective sovereignties. While President Hadi maintains juridical sovereignty in the halls of the United Nations as the head of the Republic of Yemen, the STC is building empirical sovereignty in Aden and surrounding southern governorates.

Aden has witnessed a turbulent month. On August 1, a Houthi missile strike killed 36 members of the STC-affiliated Security Belt Forces, including the revered commander, Abu al-Yamama. Following an investigation, STC Vice President Hani bin Brik claimed on August 6 that the attack was carried out in collusion with Islah, a Sunni Islamist political party that comprises a portion of Hadi’s cabinet.

The latest series of clashes sparked on August 7 when a gunfight broke out during a funeral procession as it passed near the Ma’ashiq Palace housing Hadi’s administrative footprint in Aden.

Bin Brik demanded the “overthrow [of] the government of terrorism and corruption that is allied with the Islah terrorist party.” Anwar Gargash, the UAE minister of state for foreign affairs, implored for calm. In response, bin Brik softened his tone, “affirming the preservation of President Hadi’s legitimacy” while “ridding it of the dominance of the terroristic Islah party.”

Skirmishes continued and, on August 10, STC forces seized Ma’ashiq Palace and other Hadi government sites. On August 17, STC officials refuted reports of a withdrawal of pro-STC forces from Hadi government infrastructure. The Hadi-STC intra-coalition tension stems from innate differences in the concept and practice of sovereignty in southern Yemen.

In international law, sovereignty is the exercise of power by a ruling authority. Of the three types of sovereignty, two forms clash in southern Yemen. President Hadi maintains the juridical sovereignty inherent in recognition from the UN and its member states. However, in light of both the Houthi coup in the north and separatism in the south,

Hadi’s forces maintain a light presence in Yemen itself. Beyond Marib governorate and portions of central Hadramawt, Hadi lacks legitimacy and Yemeni patronage. In fact, Hadi has spent nearly all of the past four and a half years in Saudi Arabia, having only returned on April 13 for a parliamentary session in Seyoun, central Hadramawt.

Although the STC lacks juridical sovereignty, it is carving out empirical sovereignty. This is what scholar Michael Barnett terms a governing entity’s “degree of legitimacy and control over their society and within their borders.” Separatists entities may be more effective maintainers of security and promoters of civic affinity than “legitimate” governments cloistered in far-off capitals.

By assessing political legitimacy through the two facets of security provision and ideological affinity, it is clear that the empirical sovereignty of the STC supersedes the juridical sovereignty of Hadi’s in most of southern Yemen.

Security provision is the clearest indicator of the STC’s growing empirical sovereignty vis-à-vis the Hadi government. Security Belt, Southern Resistance Forces and other pro-STC militias seized the bases of the third and fourth presidential guard brigades. These victories induced Major General Fadl Abdullah Ba’ash, a commander in the special security forces of Hadi’s Ministry of Interior, to express support for southern forces.

It is likely that more Hadi security personnel will pledge their support to the STC as it consolidates security gains. On August 19, Information Minister Moammar al-Eryani decried Security Belt efforts to seize the Hadi government’s special security forces camp in Zinjabar, Abyan. Acquiring the camp would further facilitate the STC’s control over Yemen’s Gulf of Aden littoral.

As stability returns to Aden, the security situation in other southern governorates is tenuous. The UAE, the key international benefactor of the STC, has prioritized counterterrorism in southern Yemen against the jihadi organizations al-Qaeda in the Arabian Peninsula (AQAP) and the Islamic State (IS) in Yemen. The UAE supports and trains the aforementioned Security Belt, Hadrami Elite Forces, Shabwah Elite Forces and thousands of militiamen to secure southern governorates.

While optimistic appraisals of UAE-supported forces and their ability to “stand on their own” are warranted, AQAP and IS have exploited coalition in-fighting with increased attacks in Aden and Abyan. The STC’s main security challenge is ridding portions of Abyan, Shabwah and Hadramawt governorates of jihadi presence.

Ideological affinity is the second element of legitimacy where the STC surpasses Hadi. While Hadi is originally from Abyan, his long-held allegiance to former President Ali Abdullah Saleh spurs disdain. The STC has tapped into a popular desire for southern self-determination, which has persisted since Yemen’s unification in May 1990. The STC flies the sky-blue chevron and red star flag of the former South Yemen, though it eschews the Marxist ethos of the historic state.

The STC has mobilized numerous pro-independence rallies since its establishment in May 2017. On August 15 the STC organized a million-person march which drew hundreds of thousands of southerners.

The STC still has work to do to entrench its influence throughout southern governorates. A pro-Hadi faction of al-Hiraak — a collective of southern groups formed in 2007 to promote autonomy — condemned the recent Aden clashes. Several areas in central Hadramawt are either loyal to Hadi and a unified Yemen or have separatist ambitions distinct from the STC. Additionally, residents of al-Mahra, eastern Yemen have demurred over STC authority.

For the STC to solidify its influence beyond Aden, it must demonstrate that it upholds the interests of all southerners and is not just an implement of Emirati interests. On August 15 the STC released a governance framework that deemed all southerners “partners in the victory” in Aden, stressed its commitment to liberate “southern territories still suffering from terrorism and occupation,” and endorsed economic and education reforms throughout southern Yemen.

Members of Hadi’s government and southern officials wage a war of words. The Yemeni Embassy in Washington, DC, blamed the STC and UAE for “the coup perpetrated against the state.” A journalist associated with Hadi’s presidency has called for an expulsion of Emirati forces from the anti-Houthi coalition and severance of diplomatic ties.

Official STC releases have been more reserved, though advocates of southern independence call for “liberation of all southern territory from any northern presence” and scorn the Hadi government for its absence in the south.

The juridical sovereignty afforded to President Hadi as leader of the Republic of Yemen is void of legitimacy. His forces are folding and his popularity has long been flagging. He must now rest his staying power on the efforts of his vice president, Ali Muhsin al-Ahmar, to retain Marib as his base. The STC’s empirical sovereignty, on the other hand, is coming into focus. It directs a competent security apparatus and demonstrates its desire to “fill the vacuum left by a [Hadi] government deemed illegitimate by Southerners.”

Where is southern Yemen headed?

The circumstances of recent weeks confirm the need for a frank discussion over the future of southern Yemen. While direct Hadi-STC negotiations lie over the horizon, Saudi Arabia criticizes the STC for threatening Yemen’s “unity, safety and stability.” The STC continues to voice support of the Saudis, but its actions demonstrate a willingness to defy Saudi wishes.

The most pressing issue remains how the Saudi-initiated coalition maintains a united front against the Houthis. Also important is discussion over the future of President Hadi. For all of his conferred legitimacy, he has been conspicuously absent from recent events, and his reliance on Islah members remains the main source of tension with the STC.

Finally, there must be a firm understanding of the STC’s role in administering portions of southern Yemen. The STC continues to call on UN officials to allow southern voices a seat at the negotiation table. Its ability to stabilize southern governorates over the coming months will be a litmus test for its future as an autonomous governing entity.

All of these considerations must contribute to solving the lingering “southern question.” The security and wellbeing of southerners, and by extension all Yemenis, hangs in the balance

Tyler B. Parker
Tyler B. Parker is a PhD student in international relations at Boston College, where he focuses on diplomacy, governance and security in the Gulf states and Yemen. He holds a BA in Arabic and an MA in Islamic and Near Eastern Studies. He is a former Department of Homeland Security employee and has taught Modern Standard Arabic in both the US and Morocco.