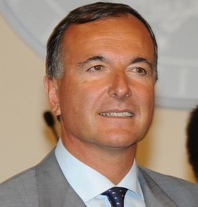 Franco Frattini is the President of SIOI – UNA Italy (Italian Society for International Organization – UN Association in Italy) and Chamber President to the Italian Supreme Administrative Court (Conseil d’Etat). He served twice as Former Italian Foreign Minister (2002-2004 and 2008-2011), and as Vice-President of the European Commission and Commissioner for Justice, Freedom and Security (2004-2008). Previously, His Excellency had served as Secretary-General of the Prime Minister’s Office (1994), President of the Parliamentary Committee for Intelligence and Security Services and State Secrets (1996), Minister for Civil Service and for the Coordination of Information and Security Services (2001-2002), and Member of the Prime Minister Commission for the Constitutional reforms (2013 – 2014). His Excellency is also Special Representative of the OSCE Chairperson-in- Office for the Transdniestrian Settlement Process.; Special Advisor to the Serbian Government for the EU integration process, and President of the High Court of Sport Justice (CONI).