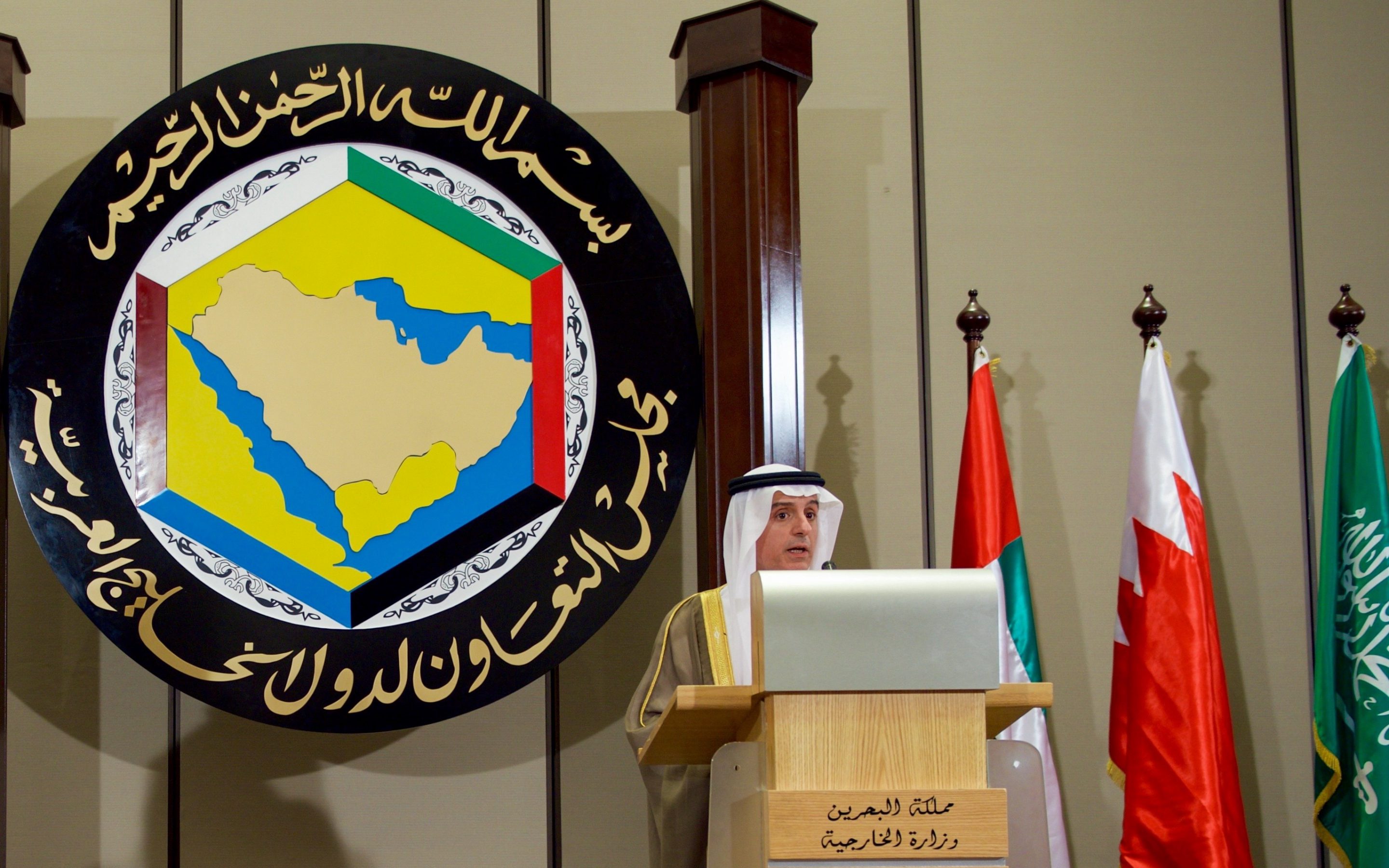 Is the GCC dead after the Qatar crisis?

Is the Gulf Cooperation Council (GCC) dead amid the Qatar crisis? The simple answer is, yes, it is dead, but in some ways this regional organization was never alive. One’s acceptance of this argument, of course, must rely on one’s understanding of what the GCC is and an examination of its origins.

The GCC lacked a solid foundation from the beginning, which explains much of its failure to develop into a more comprehensive regional organization, or more importantly, to deal with crises among its members. While social cooperation between the GCC nations has always been high, the state-level interactions have been limited, at least in terms of institutionalizing the agreements that were made among the member states.

A history of social cooperation is not surprising, as until relatively recently (circa 1970s), the national boundaries of these countries were fluid. In many ways they still are, which makes the social repercussions of this crisis far greater than is fully understood. But cultural and historical commonalities do not necessarily add up to political or economic integration; nor do they signify high levels of organizational capacity.

Homogeneity or heterogeneity have often been taken as a signal for success or failure in regional integration. This is belied by empirics. Other regional organizations, like the Economic Community of West African States (ECOWAS) or the European Union (E.U.) for example, have much less social cooperation but are heavily institutionalized concerning economic cooperation, have been far more successful at fostering political consensus.

Simply put, the GCC is not a very capable decision-making body because it is not very institutionalized. It lacks the necessary legislative and bureaucratic arms and legs to implement cooperative policies and decision-making processes. These issues are not recent growing pains. When the GCC was first proposed in 1981, there was considerable disagreement about the focus of the organization.

Leaders of the various states couldn’t agree on the degree to which militaries should be integrated and how much sovereignty each state should give up regarding its respective economic and political centers of power. While Saudi Arabia wanted high levels of military integration, the smaller states, especially Oman and Kuwait, were reluctant to give away their security. At the end of the day, despite real attempts by Kuwait in particular to focus on the economic and political benefits of cooperation, the only thing they could really agree on was that their purpose was to address regional threats.

Ironically, in the basic objectives of the GCC Charter (Article 4), security isn’t even mentioned. The focus of the charter was to create an economic and customs union. It made visa-free travel arrangements among its members and created a unified drivers’ license program for its populations. Most proposals for economic integration (a unified VAT, the removal of trade tariffs, and other monopolistic business practices) have languished, however, because leaders could not agree on harmonization of economic activity. The pattern has persisted for decades.

Perhaps academics are to blame for our belief that regional organizations can become the preeminent mechanism for political change. While classic neo-liberal theory was popular during the late 1970s and early 80s, there was a strong belief that regional institutions could order the interests of states and help them to cooperate. This would reduce ‘anarchy’ and create pluralistic arrangements that would secure national interests. The greater the degree of “interdependence”, the greater the cooperation. Most policy wonks and politicians bought into this idea.

Many of the reasons behind attempts to integrate were far from purely Machiavellian means and ends. Kuwait had particularly emotional intentions, based on its history of past threats by neighbors. The former ruler of Kuwait, the late Sheikh Jaber Al-Ahmad Al-Sabah, saw the founding of the GCC as a “labour of love”, according to a high ranking foreign ministry official.

The Gulf Cooperation Council (GCC) is a political and economic alliance of six Middle Eastern countries—Saudi Arabia, Kuwait, the United Arab Emirates, Qatar, Bahrain and Oman.
The Charter of the Gulf Cooperation Council was signed in Riyadh on May 25, 1981. The Supreme Council is its highest decision-making body and meets on an annual basis.
The presidency of the GCC rotates in Arabic alphabetical order. The alliance has a defense planning council that coordinates military cooperation between member states.

The first Secretary General of the GCC, Dr. Abdullah Bishara, recently explained that for Kuwait the GCC is “a corridor of reconciliation…There is no alternative to this indigenous corridor that is untainted” in the region. He concluded, “The GCC is an amalgamation of wisdom and moderation.”

Kuwait’s Assistant Deputy Foreign Minister Dr. Ahmed al-Nasser al-Sabah echoed many of these sentiments when he remarked that “all benefit from peace and not conflict” and that the GCC “creates a complimentary mechanism” for mediation. But this is not only for political or cultural reasons, he noted, adding that plans to further economically develop the Arabian Peninsula will require strong partnerships and exchange of expertise.

Such values were never shared by all members, highlighted by the contradiction between national political objectives and institutional goals. The GCC’s only successful role has been as a defensive alliance, particularly during the extreme chaos of the eight-year Iran-Iraq War. Following Egypt’s 1979 peace treaty with Israel, there was much polarization across the Arab world. The treaty practically caused the Arab League to collapse and created a security vacuum that the GCC, to an extent, attempted to fill for the suddenly isolated Arab Gulf countries.

The international sphere abounded with Cold War hazards that persuaded Gulf leaders to favor the GCC. Beginning in 1979, the Soviet occupation of Afghanistan deepened anxieties among the Gulf states. President Jimmy Carter’s 1980 announcement that Washington would use military force to defend its interests in the Gulf heightened regional tensions, while the Soviets, at the same time, were putting pressure on Iraq and the Gulf states to stay neutral. Whereas in the past the GCC functioned with certain degrees of success in terms of responding to threats posed by security threats to its member states, today’s environment is far different than the era of the Council’s founding. A serious question is will the Qatar crisis lead to a military conflict? Luckily, no.

This is in large part due to the intricate overlay of alliances between the U.S. and its allies, the overlapping treaties among all the international partners, and the large presence of American troops in the region. The U.S. Navy, Airforce, and Army are comfortably attached to their local allies in Bahrain, Kuwait, and Qatar. Significant recent investments in infrastructure at these bases by the U.S. and the host countries signify that these relationships are not significantly changing.

Nonetheless, cooperation is impossible if reciprocal interests are absent among the organization members. For states to gain a high level of interdependence in their transactions, there must be institutional frameworks in place. The Qatar crisis illustrates a lack of interdependence, and, unfortunately, this is not the beginning nor the end of such struggles within the GCC.

The key to mediation within the GCC since 1981 has been another set of institutions, that of the royal courts and the rulers of the states themselves. It is a Gulf tradition for paramount sheikhs, kings, and princes to deal with important political decisions directly. This decision-making body has worked quite well, with one very important caveat.  Depending on the personal attitudes, perspectives, and experiences of the various leaders, long-term planning is set aside in favor of realizing ambitions, whatever they may be. When oil prices were high, the group had grown more “clubby”, but other than that, division has always loomed.

In a recent talk at Qatar University, Dr. Abdullah Baabood stated that this “style of leadership” in the region makes it impossible to uphold the principles of the GCC, a “rules-based institution” possessing a “charter requiring all GCC leaders making critical decisions to do so by unanimous agreement.” He emphasized, “The decision to impose the blockade did not go before the supreme council, effectively revealing the hollowness of the institution”.

Because of this leadership element, the GCC’s potential is highly conditional, as illustrated by the Qatar crisis. Proper statesman and reasonable leadership is something we find quite a dearth of these days in many states. Within the Anti-Terror Quartet (ATQ)—Bahrain, Egypt, Saudi Arabia, and the United Arab Emirates (UAE)—there is little long-term planning when it comes to the Saudi/UAE-led bloc’s blockade against Doha.

The thirteen demands (and later the six principles) were not meant to resolve issues between the countries. Consequently, the ATQ has found itself more isolated than Qatar, with many of the quartet’s moves backfiring against Abu Dhabi, Cairo, Manama, and Riyadh.

The whole crisis has become somewhat of a spectacle with the involved state actors doling out money to lobby groups in Washington, issuing inflammatory rhetoric, and imposing travel bans on journalists who question certain narratives about the Gulf dispute. Many think-tanks, public-relations firms, and newspapers have capitalized on the Qatar crisis’ rhetoric, often opportunistically and for financial gain, only to further inflame the tense dispute. Qatar is by no means an unwary victim as Doha has intervened in other Arab states’ internal affairs, leading officials in many Middle Eastern capitals to accuse Qatar of a foreign policy aimed at destabilizing its neighbors. But Qatar’s political games cannot be compared to the ATQ’s given the uneven playing fields in the eight-month-old GCC crisis, which has not been a fair fight.

Qatar has not expelled over 300,000 Egyptians, or any citizens of other blockading countries, while the ATQ members have ejected women and children from their homes due to intermarriage with Qataris. Qatar has left its airspace open, while the Saudi/UAE-led bloc blockades Qatari ports and raids the country’s airspace.

The neutrals—Kuwait and Oman—were wise to stay out of the dispute. Not only have they profited economically from the ATQ’s poor planning, but they have also seen how quickly allies can turn on them, ignoring the rules of diplomacy and international treaties. Of course, Kuwaiti people learned this lesson before.

Prior to the first Gulf War, Kuwait survived by pleasing Iraq and living on Saddam’s word, but they learned, as has Qatar, that no one succeeds on good intentions alone. Kuwait has been spending the last two decades building partnerships and building capacity to such an end. One former Kuwaiti diplomat has observed that this strategy gives small countries an “international deposit”.

The GCC will enter a list of other failed regional organizations worldwide. Within the region, it can join the Arab League, which proved to exhibit much formality but little substance. Saudi Arabia and the UAE seem to be moving in this direction with their recent bilateral deals.

As renowned Gulf scholar Dr. Gerd Nonneman stated, “I cannot imagine that trust in the GCC and especially in the current leadership in Abu Dhabi and Saudi Arabia, can be restored.” He concluded that “the suspicions that Qatar [like other small GCC states] always had about the organization and Saudi hegemonic ambitions in this region, have only been reinforced.”

Another prominent scholar, Dr. Shafeeq Ghabra, noted that Qatar has had a “new birth of its own” with a new axis in the Middle East. “It’s liberated from certain contexts and relations; it can build new strategies and structures and approaches. And the blockade and the sanctions can slowly collapse under their own weight and out of their own irrationalism.”

In the final analysis, the ATQ’s poor policy choices are unlikely to produce anything positive for the quartet, at least politically. The action against Qatar has been embarrassing for the GCC, which may not ‘die’, yet will certainly move in the Arab League’s direction of irrelevance.

Geoffrey Martin
Geoffrey Martin is an advisor at Gulf State Analytics. His focus is on Kuwaiti politics and the historical development of social and political power in the cooperative societies since the 1940s. Martin is also a contributor to RAI Institute and a freelance writer for Zenith Magazine.