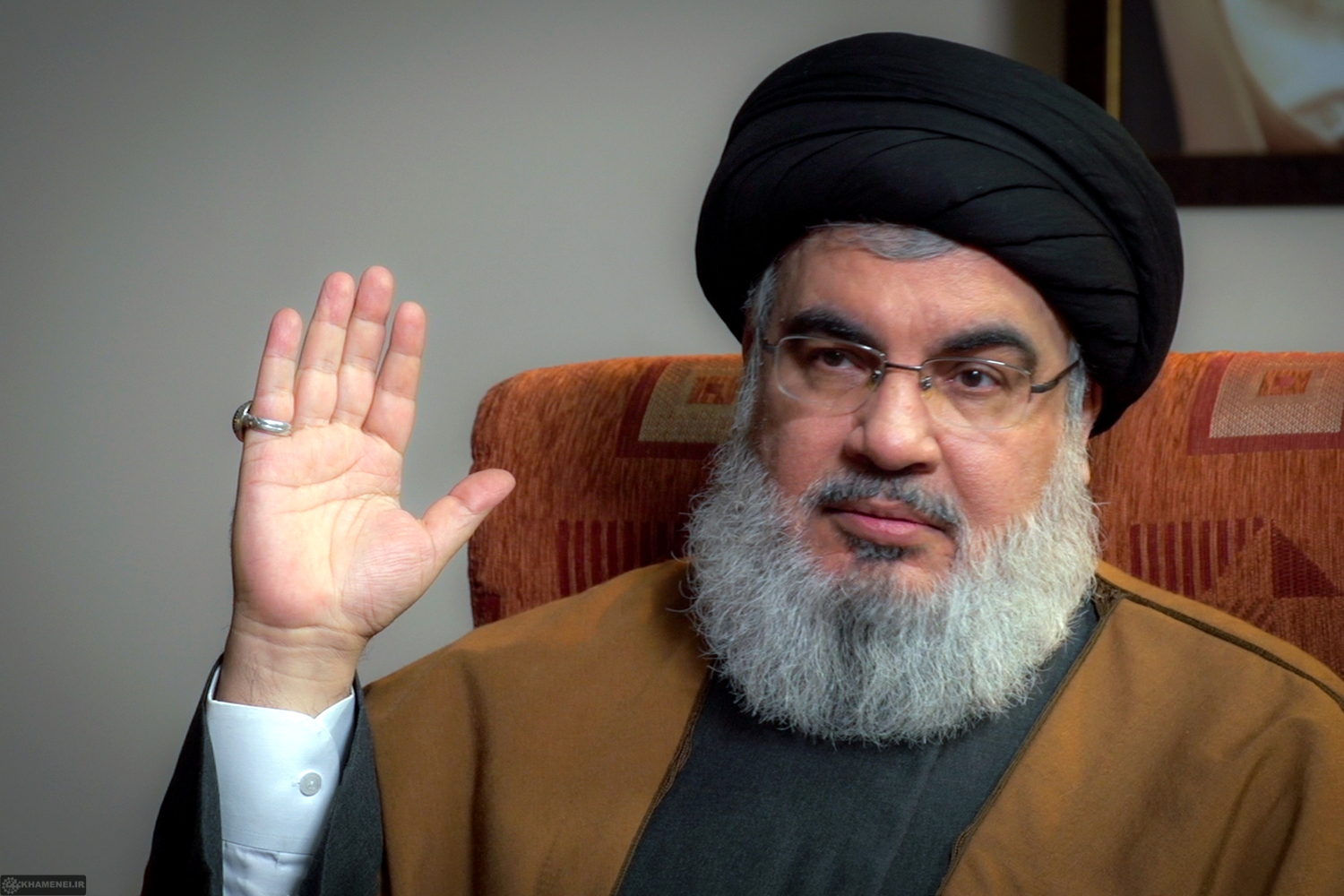 By Kristian Alexander and Giorgio Cafiero

Amid Lebanon’s ongoing anti-government protests, various demonstrators have held signs demanding “No weapons but legal weapons. 1559, make it happen.” This is a clear reference to Hezbollah, a hybrid organization, political party, social movement and regional player with global reach.

There is a long history of Hezbollah and the disarmament issue being part of Lebanon’s political discourse. The issue is complex and contentious. There are various angles. First, one needs to distinguish between the internal Lebanese debate and the demands imposed externally by Western countries. Both perspectives are interconnected.

Within the Lebanese context, Hezbollah has over time toned down its Islamic narrative and burnished its Lebanese credentials. The party has had representatives elected to parliament, various members in the cabinet, and stated that it would be willing to discuss disarmament within the framework of national dialogue. Hezbollah has pointed out that the Lebanese government itself has sanctioned and acknowledged the Shia organization’s role as a resistance movement.

It has also repeatedly claimed that it would be willing to integrate into the national defense system once the Lebanese government is run efficiently, with the Lebanese armed forces proving capable of protecting the country.

A number of Western and Arab states and Israel have designated Hezbollah a terrorist organization. These governments view the Iranian-sponsored group as a major obstacle that is guilty of impairing progress in the Middle East, sowing chaos and advancing Iran and Syria’s sinister plans. A common narrative in Washington, some Gulf Arab capitals and Tel Aviv is that Hezbollah is mainly an Iranian stooge and/or a Syrian agent.

The Shia organization, from this perspective, is a “state within a state” that willfully undermines the sovereignty of the Lebanese state while stripping the government of having the sole monopoly over the use of force in the country. The externally driven disarmament rhetoric, some have argued, is intended to demonize Iran as “harboring and abetting” terrorist movements and hence isolating it further.

The Taif Accords of 1989, which was the formal peace treaty that ended the Lebanese Civil War, stipulated and mandated that all militias be disbanded within a certain timeframe. Hezbollah was exempt from this and was allowed to hold on to its arms, which must be understood within the context of the Israeli occupation of parts of Lebanon that lasted from 1982 to 2000. For Hezbollah, holding on to its arms fulfilled various purposes.

Rationale for retaining its weapons

The Lebanese group has used the disarmament issue in order to strengthen its leverage vis-à-vis various parties, especially the state. While Hezbollah has participated in various elections and had representatives elected to parliament, the organization feels that the system has not adequately reflected its legitimate grievances and power-sharing concerns.

For many, Hezbollah has taken on a pragmatic wait-and-see approach, hoping that a political opportunity would arise. Giving up its arms would weaken its position and imply a strategic loss to the party. As some have claimed, this would jeopardize its survival as a party and as a movement as such.

However, regarding recent events, Dr. Aurelie Daher, a researcher at Sciences Po in Paris, warns: “One has to keep in mind that Hezbollah is not a party in the sense that Western political science would give the notion, as much as it is a lobby. Hezbollah does not intend to rule, does not intend to grasp all the governmental portfolios or take all and any kind of decisions at every level.”

She adds: “Their presence in Lebanese politics has been, since its beginning in the early 1990s, motivated by a will to prevent any threat against the interests of the Islamic Resistance (the military part of the organization). As long as the other political parties and groups do not jeopardize the Islamic Resistance’s weapons, Hezbollah is ready to leave rather a comfortable room for maneuver to the other political actors — whether they are friends or foes.”

Hezbollah has repeatedly stressed its exclusive Lebanese identity while admitting to its longstanding ties to Iran and Syria. Undeniably, both countries are strategic allies that have played critical and essential roles in Hezbollah’s expansion of influence across Lebanon, the greater Middle East and presumably to other parts of the world, such as Africa, Asia, Europe and Latin America.

Giving up its arms would not just substantially weaken Hezbollah, but its major patrons in Tehran and Damascus would be less inclined to invest significant amounts of funding in a group that has had to give up its major asset, namely its military capacity. Of course, Hezbollah has been very astute at diversifying its funding sources over the years and is no longer exclusively reliant on Iranian cash, which has gradually declined.

Another factor that has emboldened Hezbollah to hold on to its arms is its openly-declared success against Israel in its various confrontations, such as in the summer of 2006. Hezbollah representatives have used this event to point out to the necessity of resisting Israel further. Although many argue that Hezbollah provoked the encounter with Israel and was viewed by many as instigating the conflict, it managed to take advantage of Israel’s misguided policy of coming down hard on the whole of Lebanon.

By resisting the surge mounted by Israeli forces and by presenting itself as victorious in the conflict with Israel, Hezbollah managed to remind onlookers of its strength and its continued importance as a resistance movement.

In the wake of the 34-day conflict, Hezbollah once again used its well-established social welfare system to supply money to distraught Lebanese citizens who lost their homes and property. Over time, Hezbollah’s arms narrative has evolved from liberation to resistance to deterrence.

A moment of change?

At the beginning of Lebanon’s thawra (also dubbed the “WhatsApp Revolution”) back in October 2019, there was little discussion about Hezbollah. Most of the protesters’ attention centered on issues such as corruption, mainstream politicians, sectarianism and the corrupt political system as such. Hassan Nasrallah, the secretary-general of Hezbollah, took the high ground by pointing to the party’s fight at Lebanon’s southern border with Israel and its moral stance of being a “clean” and “pure” party.

The picture started to change when Hezbollah supporters started attacking demonstrators, according to certain sources such as Amnesty International. Many demonstrators subsequently felt that Hezbollah, in actuality, was part of the corrupt political system that has been “controlling” the Lebanese people. Many have come to see Hezbollah as the primary backer of the current government, along with its allies, the Amal Movement and the Free Patriotic Movement.

However, according to Nicholas Blanford, a nonresident senior fellow at the Atlantic Council, Hezbollah also faces an array of challenges. He says these include “financial difficulties, largely due to US sanctions against it and its supporters and against Iran; corruption issues which have surfaced in the past decade-plus in part because of the party’s sudden and huge expansion in numbers after the 2006 war; [and] the weakening resistance narrative — a whole new generation of Lebanese Shias have grown up since the Israelis departed Lebanon in May 2000, and they have no memory of the Israeli threat.”

He adds: “The last major engagement with Israel was 14 years ago. Since then, Hezbollah has been fighting Arab Sunnis rather than Israeli Jews. The party has become deeply emmeshed in Lebanese politics, not out of choice but in order to better defend its resistance priority. But playing a greater political role brings its own complications.”

Looking ahead, the situation in Syria and the ways in which the US-imposed sanctions on Damascus, known as the Caesar Act, play out in the war-torn country will heavily impact on Hezbollah’s future. To be sure, the crisis in Syria is not resolved, as underscored by the situation in Idlib, the last rebel stronghold. Moreover, with anti-Assad protests breaking out in regime-controlled parts of Syria, saying that the government in Damascus faces major challenges would be an understatement.

Within this context, many Lebanese, including the majority of Shia and Christian citizens, will see Hezbollah disarming as too dangerous from a security standpoint, given that Lebanon’s border with Syria could again become porous. Most likely, wealthier Lebanese citizens who are anti-Hezbollah will leave the country as a result of the Caesar Act’s destabilizing impact on Lebanon amidst other crises stemming from the unrest resulting from the WhatsApp Revolution, the financial crisis and the COVID-19 pandemic.

Perhaps this will all serve Hezbollah and its allies, who will defend the arsenal of the world’s most-heavily armed non-state actor.