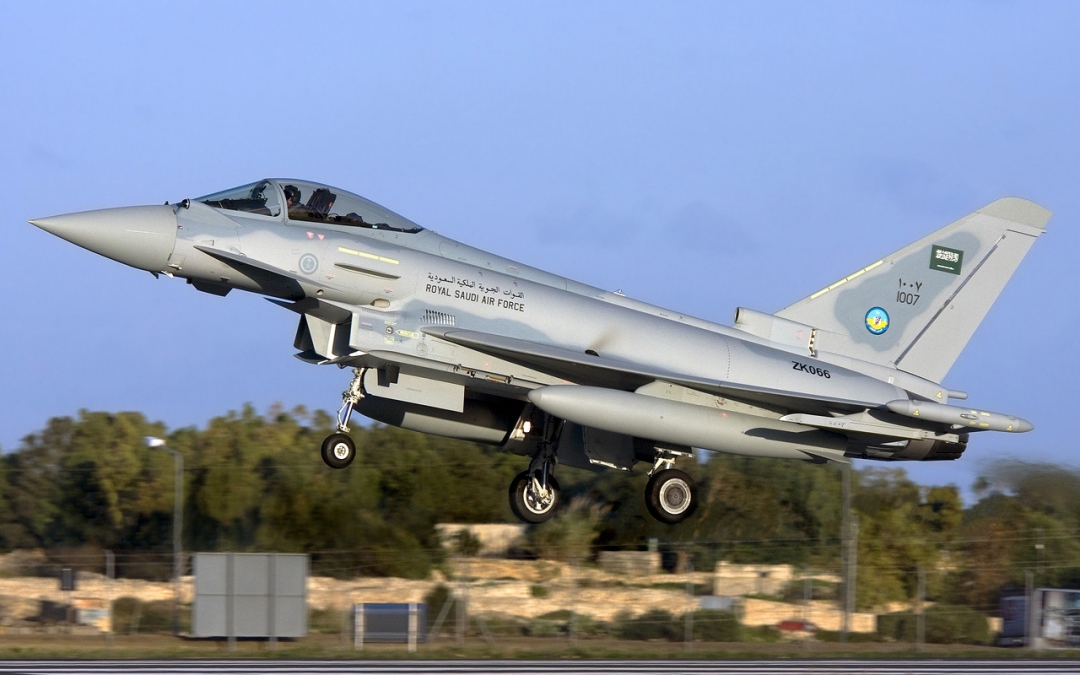 Saudi weapons purchases and their impact on Vision 2030

On April 29 the Stockholm International Peace Research Institute (SIPRI) released its latest fact sheet “Trends in World Military Expenditure, 2018.” The paper reveals that, worldwide, overall military spending increased by 2.6 percent from 2017. Saudi Arabia’s military spending, though it decreased by 6.5 percent, stood at an estimated $67.6 billion placing it third in the world. The United States with a spend of $649 billion far outranked second place China at an estimated $250 billion.

Saudi Arabia, however, continues to be the world’s largest importer of military arms. That fact helps to explain how in 2018 SIPRI estimates the kingdom devoted 8.8 percent of GDP to military expenditure. The average spend for the top 40 countries is 2.1 percent of GDP with most spending below three percent. Iran, Saudi Arabia’s regional rival, spent 2.7 percent while Israel’s stood at 4.3 percent.

In a comparable study published by the International Institute of Strategic Studies (IISS) the GDP figures for previous years were even higher. The IISS estimates that Saudi Arabia spent 12.51 percent of its GDP in 2015, 12.61 percent in 2016, and 11.30 percent in 2017. Those figures include security costs. IISS told Gulf State Analytics that “since 2017 the (Saudis) have split the two budgets between defence and security. However, for consistency purposes we continued to count them together.” The IISS says that combining the two provides a percentage of GDP spend of 10.77 percent for 2018, more than two percent higher than that noted in the SIPRI paper.

The figures caused Anthony Cordesman of the Washington based Centre for Strategic and International Studies (CSIS) to comment in a 2018 report: “This is an extraordinary level of effort for a country with so many other pressing domestic needs and (one) that is seeking to transform itself by 2030.” He went on to argue that “Saudi arms purchases are …often political, overpriced and focused on buying the most advanced system regardless of actual need.”

Cordesman raises an interesting point. Can Crown Prince Mohammed bin Salman (MbS) whose numerous positions include his role as Defense Minister and lead architect of Vision 2030, the radical restructuring of the Saudi economy and society, afford such huge commitments on military spending? In the short to medium term the answer is probably yes, with rising oil prices playing into satisfying his appetite not just for the latest in military hardware but for mega projects like the $500 billion NEOM City, “the world’s most ambitious project.”

Jason Tuvey, a senior economist and emerging markets specialist at Capital Economics in London takes the view that “sometime down the line, in five to ten years” the big spend on the military will require a reset but for now from an economic point of view it is “not necessarily concerning.” At the same time, he notes that money that could be spent on assisting private enterprise, a key pillar of Vision 2030, is effectively being diverted.

One of the reasons that the private sector reboot is continuing to falter is that small and medium enterprises (SMEs) cannot match the wages and benefits that a largely unproductive and highly bloated public sector is able to offer.  One solution that the government has proposed it will enter into is to subsidize wages in some private sector companies. Another is to increase credit to SMEs. But the emphasis remains on, among other things, spending huge sums that ensure Saudi Arabia continues to rank as the world’s number one weapons importer.

Education is another area that needs substantial investment. That process began with the Strategic Education Reform Initiative announced in 2017 with a $22 billion stake. Still the urgency of reform remains pressing, in order to enable young Saudis to meet the requirements of an emerging private sector.

Tellingly, the 2018 Saudi budget, though it slashed military spending by $3.7 billion – a reflection of the slump in revenues occasioned by low oil prices – cut the education budget by $9.6bn, nearly three times as much. A more nuanced approach would have seen military budgets taking a much greater hit and education budgets left unscathed or, given the high unemployment rate for young Saudis, even increased.

The private sector has already been hard hit by what had been a long slumbering Saudization drive, Nitaqat, being kicked into life by MbS’ determination to propel the Kingdom forward no matter the cost. Since 2016 approximately 1.5 million expatriates have left the kingdom with another several hundred thousand visa over stayers being rounded up and deported as well. But the combination of a skills deficit and low wages has meant that young Saudis have not taken up the slack. Indeed, the World Bank notes that for the first time since 2005, the number of jobs in the private sector has declined.

According to the Saudi General Authority for Statistics, since 2016, outside the military and security sector, less than 50,000 Saudis had gained employment. The statistics, if correct, suggest a profound failure to make good on a core commitment of Vision 2030 to create jobs for the huge and growing Saudi youth population to date.

One of the areas where MbS wants to create jobs is in the defense sector. Vision 2030 calls for the development of a domestic arms industry.  That is being overseen by Saudi Arabian Military Industries (SAMI) a state owned corporation charged with putting the kingdom in the front ranks of the industry, among “the top 25 aerospace and defense companies worldwide by 2030.”

It is an extremely ambitious vision. Cordesman is ruthless in dismissing the idea which he calls “one of the silliest and least convincing aspects of the Saudi 2030 plan.” Other American and German companies feel differently seeing potential in SAMI with ongoing planning meetings and establishment of a more formal Saudi indigenous defense industry.

Let me be clear: the weapons industry is brutally competitive. The United States and the UK from whom the Saudis get the bulk of their arms are not going to move aside to allow an upstart into the game. Additionally, the level of training and skills required are far beyond what the struggling Saudi education system can perhaps deliver.

Nor does the defense industry create many jobs. Undeterred MbS continues to push for a sector where, in Cordesman’s opinion, “there is virtually no way to waste money more effectively than trying to create an effective technology base or fund a weapons assembly effort in an area of industry and technology which is so demanding, offers so few real-world benefits in job creation, and where there often is so little ability to use the technology needed for specific weapons for other purposes—particularly civil ones.”

To his credit, however, as minister of defense MbS has presided over a sweeping reform of the military, aimed at clearing out corruption, removing incompetent officers and creating a far more efficient, effective and co-ordinated fighting force. The reforms began in 2018 with the abrupt sacking of senior officers, including the Chief of Staff. His ministry  began the roll out of 800 new officers intended to improve the kingdom’s overall military capability.

The reforms, which are based on a five-year planning document, have helped to strengthen the crown prince’s control over the entire military and security apparatus, a move further consolidated with the appointment of his younger brother Khalid Bin Salman as deputy defense minister in early 2019.

However, the strong emphasis on military spending has also served to create what Pieter Wezeman, one of the authors of the SIPRI report, calls a perception, or rather misperception, that “military capacity can be used to solve problems.” Nowhere is that more apparent than in the now four-year-old war dragging on in Yemen.

Though the Saudi-led coalition has an overwhelming weapons superiority, the war is locked in stalemate and contingent on a viable solution to the Yemeni tragedy. In addition to the tens of thousands of civilian casualties and the destruction of the infrastructure of the Arab world’s poorest country, the war is costing Saudi Arabia an estimated $3 billion a month.

Wezeman argues that the continued sale of weapons by the United States, who supply nearly 70 percent and by the UK who are the second biggest suppliers at 16 percent serves as a signal to the Saudis that “we are ok with what you are doing.” And as MbS has embarked on a foreign policy approach marked far less by diplomatic nous than by military muscle, the sale of weapons, in Wezeman’s opinion, serves chiefly to reinforce the misperception that military capacity and its use in war are more effective than diplomacy.

Wezeman also wonders what would happen should a Houthi missile cause significant civilian deaths in the kingdom.  Would the Saudis with their sophisticated weaponry launch a retaliatory attack not just on the Houthis but on Iran whom they blame for the war? And would that then escalate into a full-scale conflict with profoundly worrying consequences for the region and the world?

The solution would appear to be deceptively simple. The Saudis should rein in their military spending (Cordesman suggests cutting it to six percent of GDP) and redirect the money saved into education reform, the creation of meaningful and well paid jobs for young Saudis in the private sector, emphatic and consistent support for SMEs and a resolution to the kingdom’s longstanding affordable housing crisis.

In reality, the solution is not that simple. Given MbS’ personality and the unwavering support he has received from the Trump administration—despite the murder of the journalist Jamal Khashoggi, the ongoing repression of human rights and the imprisonment of women activists—Saudi Arabia will continue to spend aggressively in weapons procurement. It is equally certain that America and the UK will continue to sell to them. What is less certain is the impact such a huge commitment to military expenditure will have on Vision 2030 and on the wider geopolitical fault lines of an increasingly volatile region.