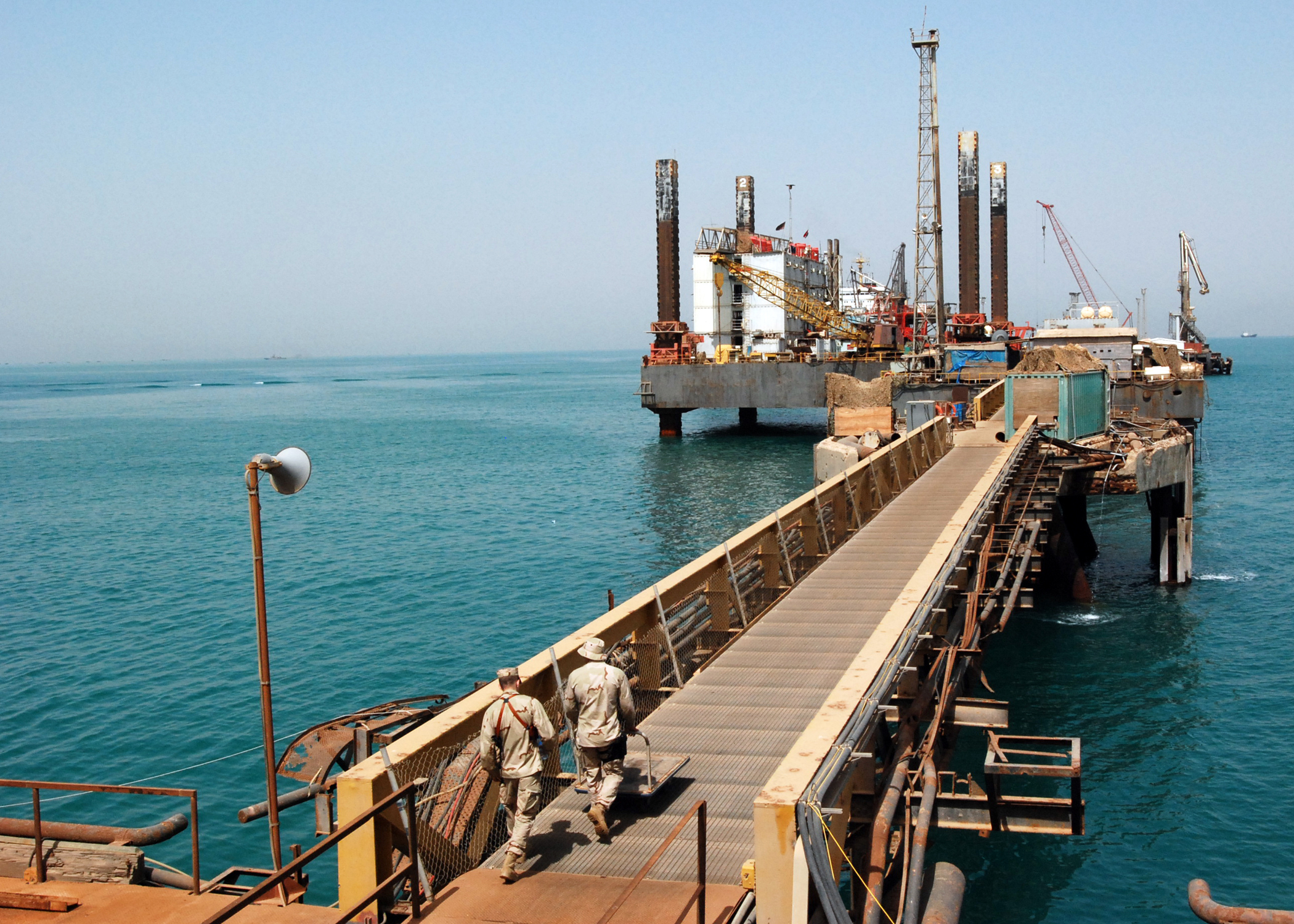 What’s in store for the Iraqi economy?

The outbreak of COVID-19 (a.k.a. coronavirus) and sliding global oil prices will push Iraq into a deep financial crisis. These challenges come as Baghdad continues to deal with political uncertainty, popular discontent, and a struggling economy. Lacking economic diversification, foreign investment, and transparency, Iraq has failed to recover from the U.S.-led invasion and subsequent occupation in 2003, as well as the more recent conflict against the so-called Islamic State (ISIS).

Beyond Iraq’s borders, brinkmanship between the U.S. and Iran has been heating up since the Trump administration withdrew Washington from the Joint Comprehensive Plan of Action (JCPOA) in 2018. Iraq finds itself stuck in the middle of the U.S. and Iran’s wargames. The assassination of Iran’s Major General Qassem Soleimani and Abu Mahdi al-Muhandis in Bagdad at the beginning of this year highlighted the extent to which Iraq is vulnerable to escalating tensions between America and the Islamic Republic.

Due to the failure of OPEC+ to reach a renewal agreement in March 2020, the subsequent Saudi-Russian price war, and COVID-19’s impact on the international economy, global oil prices have fallen to a 17-year low. Rystad Energy, an Oslo-based energy research house, suggest that a barrel of oil could fall as low as $10.

To combat further a price drop, OPEC opened talks with energy producers in Texas and US shale producers in mid-March to negotiate a coordinated response. Yet, thus far, a deal has yet to be reached.

Of all the OPEC members, Iraq, which is the second biggest producer after Saudi Arabia, has been hit hard by the fall in the so-called black gold. Around 95 percent of the sovereign’s income comes from oil. Furthermore, oil accounts for nearly 99 percent of Iraq’s exports, with around 20 percent going to China.

The 2020 draft budget, which has yet to be approved, stands at roughly $135 billion with a deficit of around USD 40 billion. However, the budget assumed an oil price of $56 per barrel.

Last week Brent Crude was trading at around $29 per barrel. The new adjusted price means that Baghdad’s net income would decline by 65 percent in 2020 compared to the previous year. Officially, a large proportion of the budget pays Iraq’s seven million public sector employees. Lower prices mean that Iraq would run a monthly deficit of $4 billion just to pay public sector salaries and keep the government running.

Iraq’s oil minister has reportedly called on other OPEC members to hold an emergency meeting to address falling oil prices. However, this has not yielded results.

Meanwhile to cover the deficit, Iraq is likely draw upon its foreign exchange reserves, estimated to be worth $50 to 60 billion. This could cover imports of subsided items like rice and cooking oil.

In an effort to cut expenses, Baghdad has reportedly reached out to international oil companies, mainly operating in southern Iraq, to reduce the budgets of developing oilfields by 30 percent. Foreign oil companies in Iraq develop oilfields under a service contract and are paid a fixed fee in US dollars.

The sovereign will also likely seek external financing in international credit markets. However, given current conditions in emerging market bond markets, this may be difficult to achieve. Iraq last sold its second-ever independent Eurobond in August 2017. Prior to that Eurobond, Iraq previously sold bonds under a USAID guarantee.

Baghdad will likely settle for bank loans from international financial institutions in the U.S., although this will be expensive due to the sovereign credit risk exposure. Moody’s recently noted the credit ratings of oil exporting nations will worsen due to lower oil prices and depleted coffers. Other rating agencies like S&P are likely to follow suit and downgrade Iraq’s sovereign credit rating.

The alternative is to seek International Monetary Fund (IMF) and/or World Bank aid via a reform program. In July 2016, Iraq received a three-year $5.34 billion loan to help rebuild the economy after the previous oil crash in 2014 and the post ISIS reconstruction.

A new IMF facility, however, only comes in exchange for painful and deeply unpopular reforms like subsidy reduction. In the current political climate, such reforms would be difficult to impose on Iraq’s society, and mainstream political parties would not be willing to impose austerity.

Iraq is facing serious political challenges. Widespread street protests swept the country in early October 2019. Yet the key difference between the current protests and others is that a large proportion of demonstrators consist of Iraq’s Shi’a citizens, who constitute the majority of the country’s population.

After months of delay, the new Prime Minister-Designate Adnan al Zurfi will find it difficult to form a new administration. He has until the middle of April to form a cabinet. The former governor of Najaf, who also holds US citizenship, has come under criticism from pro-Iranian parliamentarians who see him as the American nominee. He will be challenged to address Iraq’s economic challenges in any effective manner.

On top of Iraq’s major political and economic crisis, the country has to address the coronavirus crisis. Neighboring Iran, Iraq is particularly vulnerable to this disease not only due to geographical factors but countless other ones too from political instability to a failure of the state to serve its citizens.

As of March 30, Iraq officially had 547 coronavirus cases and 42 deaths. The country’s healthcare sector lacks necessary infrastructure to deal with too many more COVID-19 cases. The odds are good that Baghdad will request assistance from the World Health Organization (WHO) or other international entities.

In an effort to contain coronavirus, Iraqi authorities introduced a curfew which coincided with the commemoration of the death of the seventh Shi’a imam. Thousands of pilgrims defied the ban. By now, the government has shutdown all religious sites, roads between cities, and halted all religious tourism. The virus outbreak will have a negative impact on Iraq’s economy, particularly in non-oil sectors like religious tourism, especially from Iran. Furthermore, all flights between Iraq and Iran have been suspended.

Caught between Washington and Tehran

Iraq finds itself in the middle of Washington and Tehran’s standoff. Since the disbanding of Saddam Hussein’s Ba’athist regime, Iran has gained a strong foothold in Iraqi politics. Tehran has also extended its influence in economic, security and cultural affairs. In Washington’s eyes, Iran has consistently used Iraq to bypass U.S. sanctions to provide a lifeline to the Iranian economy. Iraqi-Iranian bilateral trade was about $12 billion in 2018.

Baghdad and Tehran both hope to increase this figure to $20 billion by 2021. As well as being a key destination for Iranian goods, Iraq also relies on its electricity and gas and many Iraqis visit Iran for medical tourism.

So far, Washington has provided waivers for Iranian electricity and gas to Iraq. However, an escalation in U.S.-Iran tensions, may prompt the leadership in Washington to end this concession. The U.S. has also threatened to place sanctions on Iraq after the country’s lawmakers in Baghdad demanded that US troops leave the country following the Soleimani killing. Iraqi individuals and companies trading with Iran and its entities, have also been subject to U.S. sanctions.

As Iraq’s economic situation deteriorates and the COVID-19 outbreak worsens, the U.S. will likely wait to see what kind of administration Adnan al Zurfi will form. To be sure, it’s far too early to know whether or not he can address Iraq’s serious challenges. Regardless of how he leads in Baghdad, the Americans may need to provide Iraq a financial lifeline 17 years after invading the country.